Kubo and the Two Strings

Kubo and the Two Strings follows the story of a young boy named Kubo and his quest to find his purpose in the world. I was immediately hooked after watching the trailer for his movie. So when I had the opportunity to catch an advanced screening I jumped at the chance.

*** SPOILER ALERT! You are entering the realm of spoilers. Proceed at your own risk. ***

We first meet our young hero, Kubo, and his mother at their secluded mountain-top home.

Kubo frequents a nearby town to entertain the local villagers with his guitar, pieces of paper, and a little bit of magic. And he tells the tales of the noble Samurai, Honzo. And although Kubo is an excellent storyteller, he has troubles nailing down an ending. It turns out that Kubo’s stories are his mother’s fragmented memories about his deceased father.

One night, after disobeying his mother’s orders not to stay out after sundown, Kubo is attacked by his two aunts who are trying to retrieve Kubo’s remaining eye for the Moon King. Kubo is rescued by his mother, who uses up the little magic she had left to transport her son to safety. This starts him on an epic journey in search of the only thing that could protect Kubo from the Moon King: his father’s prized armor.

Joining Kubo on his quest to find the Sword Unbreakable, the Breastplate Impenetrable, and the Helmet Invulnerable, are: Monkey, Beetle, and an origami Honzo. 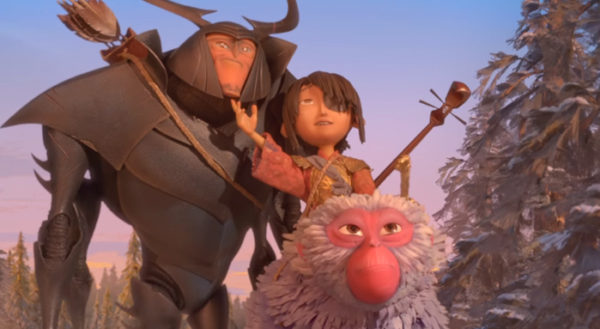 Kubo’s motley crew go through a series of Herculean-like tasks in order to retrieve the three pieces of armor necessary to protect Kubo from the Moon King who happens to be Kubo’s grandfather. And as each piece of armor is recovered, the pieces of Kubo’s story starts to come together, where he discovers that Monkey and Beetle are in fact his mother and father.

The happy family reunion is short lived when Kubo’s parents are taken from him once again as he faces his grandfather in a final battle. Kubo is only able to save his grandfather when he finally understands the important lesson taught to him by his mother, that memories are the most powerful kind of magic. His grandfather, now wiped of his memories, is aided by Kubo and the villagers with a fresh start at a new life. And Kubo finally finds the ending to his story.

Before I get into the major theme of the movie, I have to say that I loved the story within a story element of the film. The writers did an admirable job interweaving the various storylines together. Which leads to the central theme of the film, family. So many different family dynamics are explored. Particularly between Kubo and his parents, Kubo’s mother and her family, as well as Kubo and his small village.

One of my favourite moments is when Monkey is telling the story of how she and Honzo met and fell in love. Sure it was the typical tale of star-crossed lovers but I am a sap. Sue me. This quote did me in however.

I still have a serious case of Tangled feels from this moment. And the ending when Kubo releases the paper lanterns and is flanked by the spirits of his parents. “And at last I see the light…” *ahem* Sorry.

Speaking of paper lanterns, the animators also spectacularly showcase prominent elements from Japanese culture: the festival honouring the spirits of loved ones who had passed on, the legend of the Samurai, the art of origami, and the supernatural, just to name a few.

The opening scene reminded me instantly of the opening scene from August Rush. Perhaps it was the similar use of the voice-over of the protagonist. But as the film progressed the more parallels I found. Both Kubo and August are extremely gifted with the power of music, both are trying to find their place in the world, and both longing to know their parents.

What’s truly remarkable is LAIKA‘s (Coraline, ParaNorman) unique mix of stop-motion and traditional animation. This perfect blend created visually stunning landscapes and characters. The sweeping worlds Kubo and his crew travel to are breathtaking. Important note: stay for the credits. They show a quick time lapse of one of the stop-motion scenes and it’s quite spectacular.

Art Parkinson shines as Kubo. He brings an innocence and spunk to the character. And Rooney Mara is terrifyingly sinister as the Sisters. Her performance reminds me of classic anime villainesses.

My only disappointment is Beetle. Once I heard Matthew McConaughey`s voice, I couldn’t unsee him and that became rather distracting. There is also the contentious issue that none of main characters are portrayed by Japanese voice-actors, despite the story being set in Japan.

If you like epic adventures and captivating visuals coupled with a heartwarming story and laugh out loud moments, this film is for you. I found the dialogue way funnier than I expected and the score is just as breathtaking as the animation. I will suggest two things. A) bring a pack of tissues and B) try avoid sitting in the very first row of the theatre. Even in the worst seats, I still really enjoyed the movie.

Kubo and the Two Strings opens Friday August 19! If you see the film, share your thoughts in the comment section below.

‘Til next time,
Rach