Hello Nerdie Foodies, we are back from an epic whirlwind that is San Diego Comic Con. We got there a couple days early to spend time with the Nerd Family and ate our way through SDCC. Come along to check out all the (mostly) new eateries we were able to pack in. Let’s go!

As soon as our plane landed, a friend picked us up and we went straight to Chula Vista for some out-of-this-world, authentic tacos, loaded fries and Mexican sodas at Tacos El Gordo! We ended up ordering the Taco Asada, Taco Adobada, a half order of the Carne Asada Fries. It was also the first time I tried Orange Bang (tastes like orange creamsicle) and horchata! If you have a chance to stop by one of their locations in San Diego or Las Vegas, do it. This family-owned chain is doing it right with their family recipes. Check out their locations here!

We came into town a couple days early to attend Hugh Jackman’s concert (which by the way was AMAZING!) and one person in our group is Celiac. Hence, we decided on P.F. Chang’s so that she could join us for dinner before the show. This place is more Asian fusion and has huge portions, so sharing is recommended. We arrived during Happy Hour so the prices for everything was affordable! Check out their full menu here!

Ginger’s is bar that’s under the Barley Mash (check them out here) in Gaslamp. It is here where we had our blogging family’s annual reunion and it was a great sized space to fit everyone. Since it was on the same night as the concert, we missed out on the actual food that was being passed around earlier, but made it in time for the dessert! As always, this Nerdie Foodie made a bee line to the table with all the desserts: tiramisu and chocolate eclairs – it had a delicious chocolate pudding center. Still drooling just thinking about those desserts! Check them out here!

Of course, we couldn’t stop by the IHOP (aka. Maryjane’s Diner at the Hard Rock Hotel San Diego) as our first official stop for SDCC’s 50th Anniversary. We had the pancakes and we even survived the Time-Knife three times. The place was packed with a long waitlist. Our group waited for roughly 40 minutes for a table. We were able to order our food at a decent time, but it took forever for our food to come out of the kitchen. So much so, that we had decided who was going to cook each dish out of our order and offered to help the kitchen staff to cook our meal when the waitress arrived to check on us. In the end we waited for roughly an hour and a half until our food arrived. The wait-staff even served a round of complimentary mimosas to everyone whom were waiting for their food to arrive. 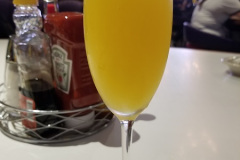 This café was a life saver for us when we had an early morning to get into line for Hall H. Despite it being a café in the hotel (The Westin San Diego), their prices were decent, the portion sizes were huge and they are open super early – as in 6am. We were totally full until our next meal! Nothing like saving money on food at a con and you won’t go hungry!

If you are near the Balboa Theatre and you’re in need of a place that is open fairly late, The Local Eatery & Drinking Hole was a great find! Not only do you get a discount when you show your San Diego Comic Con badge, their food was so good! Rach ordered their Rosemary Chicken Mac ‘n Cheese and she loved it! The portions were big enough for her to take leftovers back with us to the hotel! Check them out here!

We can’t not stop into Ghirardelli’s on a hot summer day! How can you go wrong at an ice cream shop that also makes chocolate? Side note: you get an individual chocolate square when you purchase an ice cream cone! Score! Ghirardelli’s is always a must and they are even great for those with gluten allergies. Check out their various locations here!

For the first time ever, we went to our very first D23 party at the House of Blues (check them out here)! There were tons of appetizers and desserts for everyone whom attended and D23 Gold Members also got a complimentary drink ticket! The food was actually pretty tasty with a ton of flavour. It was too bad that we didn’t have a chance to try the mac ‘n cheese balls and the meatballs, but we were told by our photographer Kevin (@djkastle) that it was delicious! D23, you sure know how to serve food at a party! You can check out D23’s website here!

Why pay for expensive con food inside the convention center when you can buy it for a cheaper price at one of the many food trucks outside the convention? Plus, when you stand in line, you can buy the food to take into the convention center and snack on it while you’re waiting to go into a panel room! Let’s just say our group made multiple trips to the Trevi Ristorante’s food truck while we were waiting in the Hall H line on Saturday morning. It was worth carrying the pizza box into the hall and the food was actually pretty tasty even when cold. Check them out here!

A family-style Italian restaurant, our group decided to come here for our first farewell dinner (a couple of our members left on Saturday night). The small-sized dishes serves 3 people and the large size serves 5. We just ended up ordering a bunch of dishes for one half of the table. The portions were huge! We definitely had a ton of leftovers to take home with us and we were a group of 19! Least to say, we had a great time here and the food was delicious! Check them out here!

Our farewell dinner part 2 for the rest of the group whom had stayed all the way to the end of the con. This place is rad! It’s pretty much a gathering place where you could play giant Jenga, go bowling, karaoke, or even play bocce all in one spot! The food on the other hand was delicious! The queso – on point. The mocktail we had ordered for the group was super refreshing and tasty, their salads are generous in portion size and so are their burgers! They even have one that has a double patty. ‘Nuff said. A definite must stop-by. Check them out here for all their locations!

A staple and must visit every time we visit San Diego. The Mission has yet to serve us a bad meal. We love the crispy rosemary potatoes, the chicken apple sausage, the giant pancakes with berry puree art. How can you go wrong? We can’t say enough good things about this place and will always try to squeeze in a visit for a great breakfast/brunch meal! Check them out here! If you plan on coming here, come with an appetite.

Are there any other places that you’d like us to check out? Let us know in the comments below and on social media. If you are in San Diego, check out these places and let us know what you think!