Hello Nerdie Foodies! Welcome to the continuation of my Nerdventures in Houston, Texas! Roni took me on a culinary trip of sorts and we ate a ton of yummy food! Everything from good old home cooking courtesy of Roni’s mom to food trucks, sit down restaurants and everything in between! We’ve barely scraped the surface of the yummy eats in Houston, so let’s go check out what has been uncovered!

My first meal right after I landed in Houston was at a Japanese restaurant. I’m pretty spoiled when it comes to Japanese food thanks to the City of Vancouver, however, Azuma was actually pretty good. I thoroughly enjoyed the food, drinks, and company!

After sushi, we went to Salento for some flourless chocolate cake! Everyone in the group was raving about this cake, so of course, we had to go for a slice! We split one slice and it was really good, despite being a tad too salty for our liking. The indoor décor transports you back to Europe!

Now this is an interesting place. A Vietnamese couple cooking authentic French cuisine. They are a staple in the foodie scene here in Houston for many years. This place was so busy that it was almost completely packed by late morning! We made it in the nick of time and did not have to wait in a super long line up. Side note: Their croissants are super flaky. YUM!

This Vietnamese fusion food truck was parked right outside the garden pavilion in Hermann Park. Both Roni and I were wanting something cold to cool off in the heat and we were on the hunt for some lemonade. While we were waiting for our drinks, the lady manning the food truck offered us samples of their marinated pork meat. It was absolutely delicious! I’m salivating just thinking about it. Next time, I’m getting a banh mi sandwich.

My first time having Texas beef, as Roni calls it, Texas cow. I could not pass up the opportunity to try Texan beef in the State of all things barbecue. Now let’s talk about their house rolls with that delicious butter. It’s not just any kind of butter folks, it’s cinnamon honey butter! It’s seriously amazing! It’s got the sweetness from the honey with a slight kick with the cinnamon, yum! I would have just eaten the bread and house special butter for dinner if I hadn’t ordered an entrée.

I had the 6oz hand cut sirloin steak with a side of fries and salad. The 6oz was the smallest size and it was super filling. The salad even came on its own plate! The steak itself was cooked perfectly at medium rare and it didn’t need anything else to enhance the flavour. No ketchup, no BBQ sauce, nothing. Granted I should have at least poured myself some BBQ sauce for the fries but I didn’t think of it at the time.

Nothing like a home cooked meal, okay, half of a home cooked meal. Roni’s mom made us some home-made oatmeal. It wasn’t too sweet, yet not bland either. It was really good! And for those who know me, I’m not much of a coffee drinker. When I do, it has to be mainly milk/cream and sugar. So when Roni said her mom’s coffee was super weak for her taste buds, I knew that it might be okay for mine. So I had a cup and I don’t know what Roni put in the coffee but it was dang good! And finally to top off our brunch we had conchas, a Mexican sweet bread! So good with the coffee in a foxy mug! 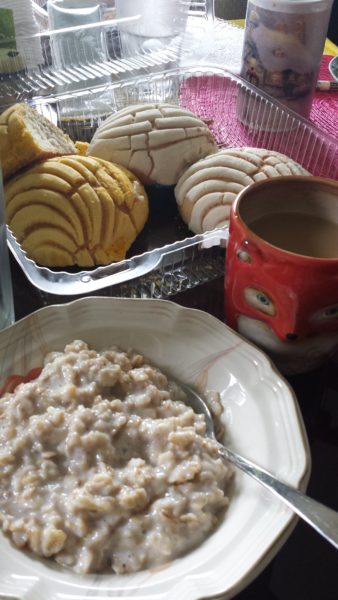 Now I have to admit, I’ve never been to a Bubba Gump’s restaurant until now. Our waiter at this movie-themed restaurant entertained us while we waited for our food to arrive by asking us trivia questions from the movie Forrest Gump. One tip before you go, you can always use the things on your table to answer said trivia questions! Also, you wouldn’t think coconut and marmalade would go together, but their coconut shrimp dipped with their marmalade dipping sauce was out of this world! And of course, I kept the souvenir glass that my drink came in!

One will always have room for dessert. We stopped by Sweet Paris on our way home from our Galveston Island day trip for something sweet to end the night and my short trip. In other words, we needed a Nutella and chocolate fix. We had the banana and strawberry Nutella crêpe, Nutella hot chocolate and Mayan hot chocolate. Side note: I would totally love to take the chandelier home with me if I could.

(All the Nutella! / Photo Credit: Jenine)

My final meal in Houston before I had to catch my flight back home. We had brunch at the Brasil café. Can I just say that the apple juice comes in such a cute bottle?? Roni had the egg white omelet and vanilla latte. I ordered the Migas and it was super filling! Definitely didn’t need to buy any food on the flight home until dinner time.

And there you have it! A taste of Houston spanning a ton of different ethnic fares!