What a whirlwind of a weekend! I’m not going to lie, I think my fingers are a little bit twooted out after all the live tweeting from Creation Entertainment’s ONCE Con Vancouver. But it was worth it for our Curious Crowd and others on the Twitterverse!

This was my first Once Upon A Time convention and it just happens to be the final one. So, I decided to go all out and get the Gold Weekend Pass. Go big or go home right? Well, turns out I went big, an all-out kind of big and I wouldn’t have changed a thing for most of it. To prepare for this past weekend, I had some serious catching up to do. I was still on Season 2, so on February 2nd, I decided to re-watch the series by binging every episode that had aired starting right back at Season 1 episode 1. I am proud to say I had finished watching all 145 episodes in 41 days (March 14th). Yes, that included all the Frozen episodes as well. And like Karen David, it gave me that much more appreciation for each character and their storylines as they evolved throughout the series. And boy was I ever glad I did just that!

The panels were so fun and entertaining. Because I had purchased a Gold Pass, our group had the privilege of getting two extra panels (one on Saturday and one on Sunday) on top of the rest of the regular programming. And that was such a treat!

Alex Zahara (Midas, King) kicked off the weekend with the first panel on Friday. There were not that many people who showed up on Friday and the convention ballroom was very sparse. It took a while for the crowd to get into the spirit of the convention, but Alex was a gem! He kept his panel very casual and regaled stories from his vast career. From there people started to warm up and got more and more into the panels and then whenever Lee Arenberg or Chris Gauthier came out to end the panel (they were the Masters of Ceremonies), we all groaned because we didn’t want it to end, especially when it came to the final panel on Sunday. If you want to see what happened during each panel, check out our Twitter Feed (@nerdycurious) for the live tweets!

You could really tell that each cast member holds the utmost respect and love for each other. Most celebrities will say that their cast all get along with each other, well, the cast of OUAT definitely have that and it shows. It may be a convention for us, but for them, I think it’s safe to say that it’s more like a family reunion. And those are the best kinds of conventions out there.

The Contests and Entertainment

Each day during the 3-day con, there was an extra something aside from the usual convention programming of panels, photo-ops and autographs. Friday there was both a yes/no trivia game – I ended up being in the Top 5 in one of the rounds which is not too shabby if I do say so myself, and karaoke that night that was open for con goers to participate and sing with the cast on stage. This cast is talented and they all do love to sing and have fun!

Saturday as the costume contest. Since I had paid an arm and possibly a leg for my pass, I wanted to do as much as I could this weekend and experience everything. That also meant getting over my fears and entering the costume contest. I took Red out of my closet and brought her back one more time since SDCC 2016. I didn’t win the contest, but there were some amazing cosplayers out there and we came out in full force! The 2 winners of the contest tied for first place both did reincarnations of the Evil Queen and they were really well done! Second place went to an awesome Nimue cosplayer and they scrapped the third-place prize. Everyone didn’t go empty handed. We all got the Hyperion Heights mug as a gift for participating in the contest.

Saturday night was the Once Upon A Concert where the cast came out and gave us a musical show, everything from country music to original songs. There were no intermission breaks and the show was 2 hours long and backed up by the house band Samurai Fish! Such a great show!

Ready For The Concert 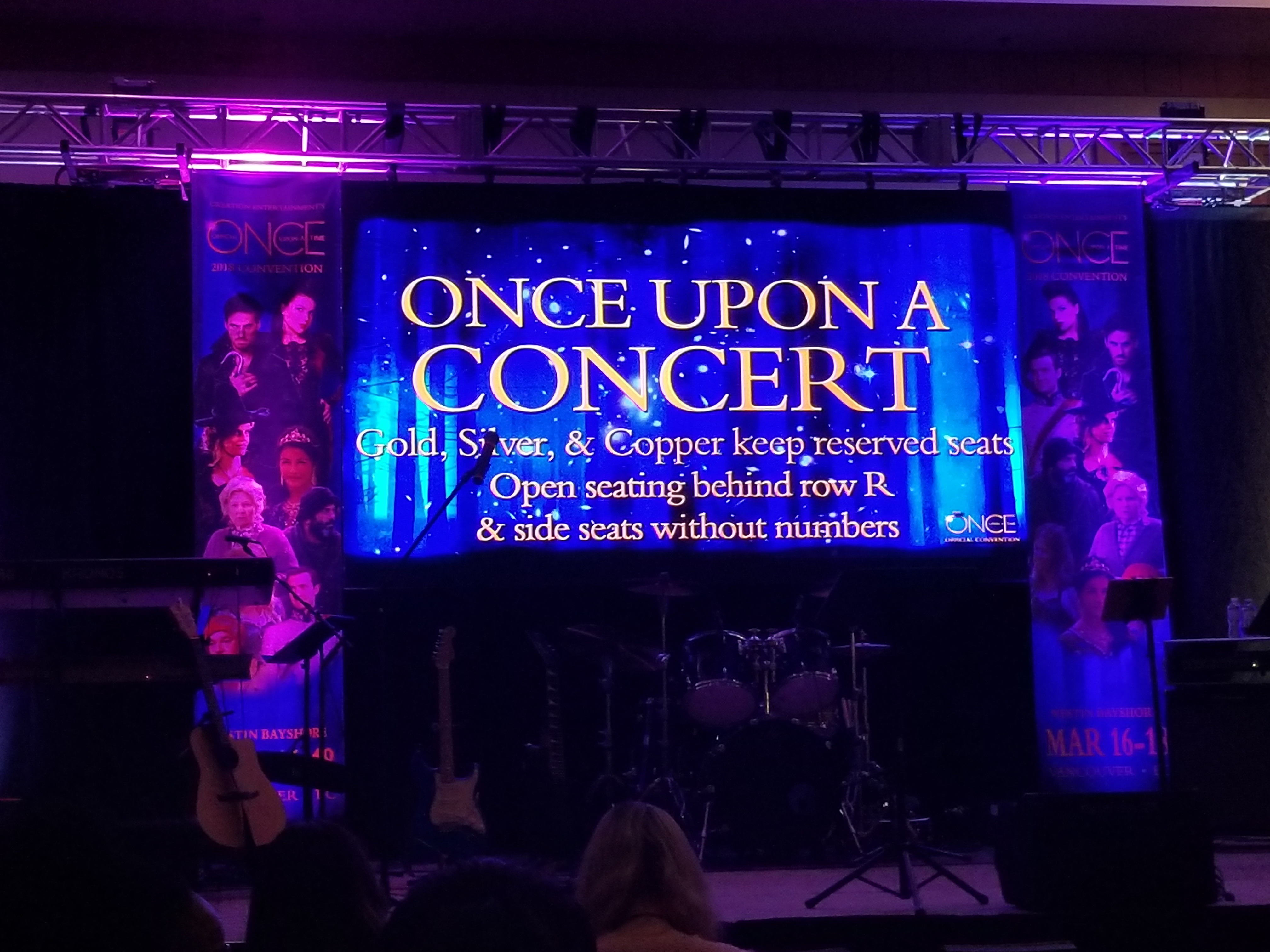 Both Saturday and Sunday had the no-minimum live auction where Creation Entertainment were auctioning off these giant-ass signed banners and were also part of a package where you got an extra signature with that particular cast member. They were also auctioning off sets of signed photos (5 photos in one set) and a couple t-shirts. If you know us, we love a good auction here at NC, all thanks to NerdHQ. I just wanted to throw my hand up to get the bids going higher. Fortunately, the auction item that I actually wanted and bid on, I did end up getting. 5 signed photos for $100 Canadian? That is pretty good in my books!

These giant banners were some of the banners up for auction along with the stage banners, and signed photos. / Photo Credit: Jen

I definitely wanted something special to get signed by the cast. The Gold Pass included 6 out of the 12 cast members. Unfortunately, Gil McKinney and Michael Coleman had to pull out of the convention in Vancouver and their autographs were part of the Gold package. So, they replaced their autographs with signed photo options from Eion Bailey, Sean Maguire and Robbie Kay (cast members of the show whom were not going to be at the convention). However, at the last minute, Robbie Kay showed up for one day.

I originally wanted to make my own copy of Henry’s storybook but with only one month to make things happen, I decided to create a photobook instead that had all three years of our Disney Princess and OUAT cosplay photos in it. I had left 2 pages in the book blank for all 12 actors and actresses to sign on. I think it turned out quite nicely and it was a great way to showcase our cosplay photos and at the same time create something special for the convention.

I hadn’t originally planned on getting all the cast members signatures, but in the end I’m glad I didn’t stick to my original plan.

When you originally planned on only buying two photo-ops but end up getting 5, that just says it all. We knew we couldn’t pass up the chance to get a photo with Lana Parilla, Rebecca Mader, Colin O’Donaghue and Jared Gilmore. We would have bought all the other photo-ops but alas, we had to draw the line somewhere to keep our wallets somewhat intact(-ish). We didn’t plan on any specific poses prior to the con weekend but came up with poses while we were waiting in line. They pushed us through pretty fast and they had a good system in getting people through each photo op. I think our pictures turned out pretty awesome!

Finally, the Merch! Vendors area had a lot of space, but there were not that many there. Aside from Creation Entertainment’s own two tables (one had unsigned and signed photos, and the other had t-shirts and mugs), there were three other vendors: Jason Palmer was on hand at his booth to sell and sign his artwork. Alas, I did run out of time to find a print that I loved to buy from him. One day, it will happen!

I’ll be at the Creation Entertainment’s Once Upon a Time convention in Vancouver this weekend. I’ll be including these Mini posters for Sun Dogs, @jenmorrisonlive ‘s directorial debut. With purchases while they last! Go to creationent.com for details on this weekend and upcoming Once shows. #sundogs #onceuponatime #emmaswan #vancouver

And finally, the third table was taken by Christina Santolin’s Icy Jewelery! This was without a doubt my favourite booth, because Christina is a fellow Canadian and she had all of her wares in Canadian dollars. Trust me when I say when the exchange rate sucks, you’d want the currency to be in your money. Not only does she create OUAT jewellery, she also has things from Lord of the Rings, Game of Thrones, The Walking Dead, Marvel, Harry Potter, Doctor Who and more! Check out her website here! It’s still a work in progress.

And the only reason why I had seriously considered just biting the bullet and paying the extra money was for the set tour at Bridges Studio. Being the local Vancouverite, I knew that this was a once in a lifetime chance to see a glimpse of the closed set as the studio hasn’t offered tours in a very long time. After bouncing back and forth for a bit, I decided to just go for it. When would I ever get the opportunity to go and visit a closed set? This was my chance and I took it! Boy was I glad that I did! Touring the set was fantastic! We got to see some of the current sets, some props from previous seasons, sets from episodes they had JUST filmed and has yet to be aired – it seriously looks so cool, it will be worth the wait. But the best part was when they took us through the costume department and into Eduardo Castro’s hive. We weren’t allowed to take photos inside the costume department, nor were we allowed to touch anything. It was very hard not to reach out and touch anything. But I was good and I clutched onto my photobook like no tomorrow. It was well worth the money.

Science For Girls (aka. Lucy's Desk)

Would I ever go to another Creation Entertainment convention and buy one of the top-tiered passes? Probably not, unless it’s for a show that I absolutely loved. The amount of money they charge for the top-tiered pass is really expensive after the conversion rate from USD to CAD. Because this was the final OUAT Convention in Vancouver, I braced myself and went for it. What would have been better was if they had Canadian prices listed on all the vendor’s areas so it was visible. Also, with the amount of money we are spending, the lanyards could have been the nicer fabric ones (like SDCC) instead of the thin rope type lanyards. That would have been a nice touch. Instead of having someone writing down the row, seat number, and tour number on each person’s lanyard when you go to register, maybe have them already printed on the badge. Since each badge is not personalized with the buyer’s name on it, it would be easier to have at least the row and seat numbers all printed on the badge itself before it is handed out to the person. The tour number could be written down by hand or have sheets of numbered stickers ready to put people’s badges. Other than that, I thought the convention was really well run and was fairly on time. I had such a fun time that all the little bumps during the convention didn’t really deter from us having a fabulous time. If you can swing it, do it and experience everything, even if it makes you a bit scared to put yourself out there, because in the end, you’ll have a great time and even better memories for a lifetime! 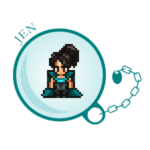