Hello, nerds! I know what you’re thinking (She’s not doing Crafternoon today! Has she possibly gone mad!?) The answer is, of course! Never fear, Crafternoon isn’t going anywhere, but I decided it was time for me to add in a gaming segment. So, starting this week I will be alternating Gamer Girl Musings and Crafternoon.

So let’s get to it….The game I am currently playing is Sword Art Online Re: Hollow Fragment. This was originally a Vita game that you can now download from the Playstation Store for the PS4. I am a huge RPG fan, and I am a huge anime fan (Sword Art Online being one of my favorites!). Some of the criticism I have heard about this game was about the horrible Japanese to English translation.  As far as I can tell, it seems thay have addressed that issue and fixed (for the most part) the horrible subtitles.

Normally I prefer turn-based RPG’s but as we all know that style of combat seems to be on its way out. The combat system in this game seemed confusing at first (maybe because I’m stubborn and get bored by tutorials, thus did not go through the tutorial) but after messing around with the controls during some of the easier fights I quickly discovered how to pay attention to what my battle partner was telling me to do and also figured out the difference between defensive, offensive, and special moves. It wasn’t until just recently I discovered what the hell my partner meant when she would tell me to use a sword skill

While you do have the option to customize your character when you begin, I chose to keep Kirito’s appearance the same as it is in the anime. Who knows maybe I will choose to be a blonde female the next time I play…There are several NPC’s you can choose to partner up with during quests and battles.  Among them the many female characters who just find Kirito oh so irresistible (I can neither confirm nor deny the fact that I may have a slight cartoon crush on Kirito….), and of course the adorable AI Yui.  So needless to say this game is certainly not lacking in the strong female category! 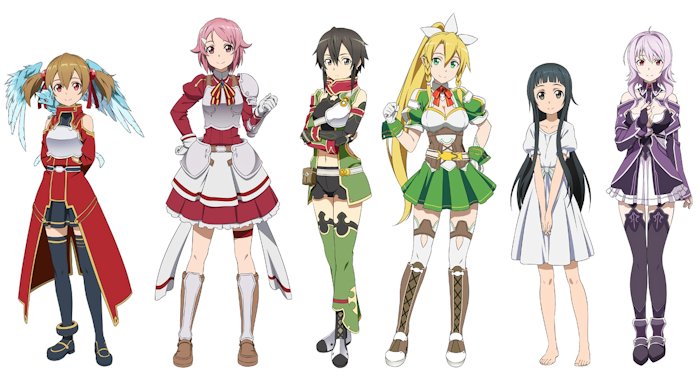 I am still in the beginning stages of the game but I have been sticking with it which is a good sign since I normally have severe attention problems when it comes to a lot of games. I think they did a really good job making this game feel as though it is an extension of the anime even though the story in this game is not canon to the anime. Since the game is not exactly canon with the anime, I can excuse the fact that Leafa/Suguha is present when she does not show up until Alfheim in which characters can change the looks of their avatars whereas in SAO the avatars revert back to how the players look IRL and….Suguha does not look like Leafa. That would be my ONLY criticism thus far about this game (EDIT: I have progressed a little further into the game and it seems that Sugu is there as part of a non-canon story element that they added in which somehow she got her avatar from ALO into SAO simply by using someone’s nerve gear…I don’t find that entirely believable, or maybe it’s just because that never happened in the anime but I will have to keep chanting the phrase NON-CANON over and over again as I play this.  Honestly, I think they did it simply as a way of having Leafa in there since she is an important character in the second half of the first season.  ALSO another NPC that you have the ability to team up with, Sinon, doesn’t actually show up until the second season of the anime and never was a part of the original SAO but she is a great addition in this non-canon universe).

You don’t necessarily need to have watched the anime to understand and appreciate the game, though it does help to know some of the back story (but that’s what Wikipedia is for, amiright?) but I do strongly suggest you watch it so that you can understand the relationships between all of the characters.  At the very least you should at least watch the first half of the first season….but by then you might very well be hooked.  So far my favorite NPC to pair up with is Asuna.

Her sword attacks pack a powerful punch which is especially useful during boss battles. It’s no wonder Kirito and Asuna are so compatible!

Seriously, how adorable are they?

There have been some very taxing moments…for example I was at a point in which having almost completed the first big boss battle suddenly my wonderful, nerdy husband needed assistance with a household task at that exact very singular moment in time and it couldn’t possibly wait! So what does any gamer do? Pause the game! Imagine my dismay when I un-paused and got this message:

WHA!?!? I was beyond pissed…little did I know that in an effort to replicate the death risk factor from the anime into the game (without actually killing players in real life) they eliminated players’ ability to pause during battles. In other words, in SAO PAUSE EQUALS DEATH!!!! And of course I took it out on my poor hubby….shamefully. I rage quit, sat there in my bed pouting for a bit….then turned the PS4 back on so I could try again.

I was thoroughly satisfied when after the seventh attempt at the boss battle, VICTORY WAS MINE!!! I won’t say what part of the male anatomy I likened the first boss’s appearance to…you can be the judge of that:

All in all I am really enjoying this game and it has renewed my love of gaming in a way most newer games have not been able to in a long time (What can I say? I enjoy the classics). If we have any Twitchers out there or anyone who is curious about Twitch, keep an eye out as I will soon be playing SAO via our account under the username Nerdy_Curious. Be sure to subscribe to stay up-to-date with our gaming excursions!

Also be sure to check out Sword Art Online Re: Hollow Fragment for yourself. Watch the trailer below:

Until next time, stay nerdy my friends!