We continue our look back at highlights from FanExpo Vancouver 2019’s main stage panels. Here’s a brief recap of what shenanigans went down on Day 2 of FXV!

It was such an inspirational hour with Mehcad as he shared his spiritual journey which started with him dying and coming back to life. 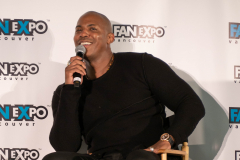 We could never pass up the opportunity to spend time with Disney royalty. Our favourite story that Paige shared was how Angela Lansbury (after flying all night), recorded the theme for Beauty and the Beast in one take!

All smiles from Wallace as he recounted memories from The Princess Bride and Clueless as well as a film near and dear to his heart, My Dinner with Andre. 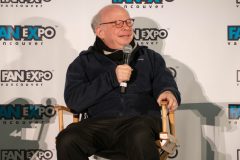 George is currently in town filming a mini series recounting the harrowing events surrounding the internment of Japanese-Americans after the bombing of Pearl Harbour. He also regaled us with stories of his time as Sulu and thanked the Trekkies for sticking by him.

The Cast of The Flash

If there’s one word to describe this panel, it would be doughnuts. And there were lots of mini-doughnuts to be had as fans delivered on Tom’s request!

Pom spoke about her close friendship with fellow Guardians castmate, Karen Gillan and shared her excitement for Captain Marvel.

Sean and David spoke fondly about their time on the Gotham set and shared their admiration for Ben McKenzie as the captain of the show. 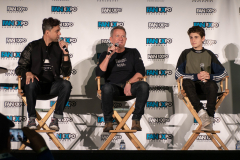 It was definitely a packed and busy Day 2!

As always, a big thank you to our photographer, Kevin (@djkastle).

Stay tuned for our final day of panels!