Well Curious Crowd, it’s been a week and we have finally recovered from our return adventure to Seattle for ACE Con 2019! We’re still completely blown away by our experience, so let’s just dive right in with our recap from the amazing panels and photo-ops!

Jen finally made it to a live Funkast after multiple attempts at various cons with no success! The entire Funkast crew Hilary, Cameron, Ashley, Dima, and Sully were on hand for dad jokes and of course some shiny reveals!

Check out the full episode!

Speaking of Funko, they also had a main stage panel with a few of the folks who help make the magic over at Funko: Kieran Lampert (Sculptor), Mike Bushnell (Program Manager), Corinne Cavallaro (Animator), and Chris Sully (Marketing Manager). They shared their process, the sheer volume of product lines Funko offers (even they were unsure of the number but you can find out in the app!), and their favourite fandoms. Of course, we cheered extra loud for one of the coolest cats we know, Sully!

We’ve said this before and we’ll say it again, Deborah is adorable. She spoke about her love of Daredevil (and spilled that co-stars Charlie Cox and Jon Bernthal are big acting nerds), D&D (offering advice to those new to dungeon mastering to just let loose and have fun), and her beau, EJ. Be sure to check Deborah out on Relics & Rarities.

Well… Let’s just say this panel derailed right from the get-go and we were here for it. The photos speak from themselves

Captain America (Chris Evans) and Captain Seattle (Jeremy Renner) were joined by their annoyed father (Don Cheadle) while they answered fan questions? (this is somewhat debatable) about emotional scenes from Endgame, what their future holds, and what the MCU has meant to them. But the real star of this panel was the adorable doggo that captured Chris’ and all of our hearts.

The final day of @ACEcomiccon is about to begin, so let's look back on the pupper that stole the show yesterday being loved on by @ChrisEvans. #ACEComicCon #ACESeattle https://t.co/ERCtc6Pvxo

Jen had an awesome question to ask Lee, but alas, the panel gods were not on our side this time. But we did learn that Lee would have loved to play Ned (Pushing Daisies) for another ten years if he could, Zoe wanted to be her own superhero (be they green or blue), and Josh was just as clueless about the Infinity War dusting as the rest of us were. Also, if you’re curious, moderator Angelique sorted our trio into their Hogwarts houses: Josh (Slytherin), Zoe (Hufflepuff), and Lee (Gryffindor).

There was even a birthday sing-along!

From Kingsman to Rocketman (Taron Egerton) 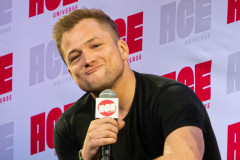 Side note: even though the photo-ops are over in a blink. Everyone was absolutely lovely and Chris gives excellent hugs.

As with most of the cons we attend, inadequate signage in regards to where VIP, media, and general admission attendees could sit during the panels was probably the biggest issue we noticed. Luckily, the organizers thought on their feet and had signs in place for Sunday’s festivities. As for photo-ops, we found the process was much smoother than it was last year with very few delays. That being said, it would probably be better to have the ticket redemption desk closer to the entrance of photo-op area as some first time guests had to leave the photo-op line, go to redemption desk to redeem their QR codes for physical tickets, and return back to the photo-op line to clear security.

Aside from those minor issues, we had such a fantastic time. The ACE Universe staff were incredibly kind to us and Angelique was a kick-ass panel moderator. ACE is quickly becoming one of our favourite cons.

We want to give a massive shout-out to Jacquelyn from ACE for being so organized with all things press and our amazing photographer, Kevin, for his help over the weekend! All of the panel photos we’ve posted were taken by him and we cannot thank him enough, so please check out his site here.

We have more from ACE including a look at Artists Alley, some of our favourite cosplay, and the delicious food we ate while in Seattle! Stay tuned!